Each week we will highlight stories we feel are interesting in the education space.
By Peter Burdin 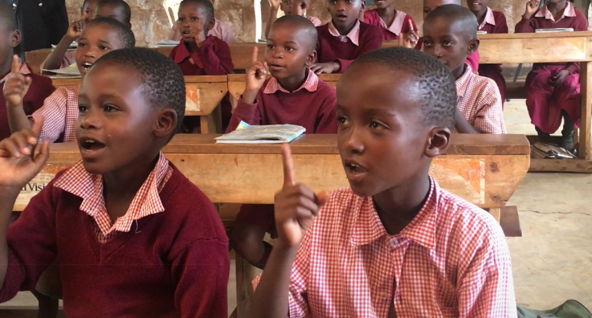 Some seven million maths textbooks have been distributed into primary schools in Kenya – with dramatic results.

This means all children in grades 1,2 and 3 now have a maths textbook compared to previous years when more than three children had to share the same textbook.

The initiative from the Global Partnership on Education, along with a new teacher training programme, a school grants scheme and a new range of teacher performance assessments is changing primary education in rural Kenya.

GPE’s Senior Education specialist Fazle Rabbani went to see for himself the difference the scheme was making and was impressed with the impact it was having on the teachers. Writing in his blog he said:

“More than 117,000 teachers have been trained in innovative ways of teaching maths and have received guides to support their ongoing teaching. Impact of the new training is monitored, and teachers receive feedback on their performance. So far over 17,000 lessons have been observed by trained curriculum support officers. Data collected from classroom observations are also analyzed to improve teacher training and textbooks.”

In his blog Fazle says that exam scores are analysed to identify which subjects need more attention and reported to each school. The reports are also available at Kenya’s National Examination Council website.

The next challenge, he says, is to expand the lessons and benefits of the project to other subject areas and to other schools.

The International Labour Organization says one in four of the world’s estimated 40 million slaves are children.

According to the U.S. State Department’s 2017 Trafficking in Persons (TIP) report Kenya is a source, transit and destination country for trafficking where children are bought and sold into forced labour in domestic work, farming, fishing, herding, street-vending and begging. Girls and boys are also exploited in prostitution throughout Kenya, including in sex tourism on the coast, it added.

The 2017 report said the Kenyan government had identified 153 child victims in 2016 although campaigners say the true number is far higher.

To counter this a Kenyan charity - HAART- has launched a range of educational materials to teach children about the dangers of trafficking, in a bid to combat child slavery and exploitation.

The manual helps teachers plan lessons explaining to children what traffickers and recruiters are. It uses discussions, songs, drawings and role-playing to get the message across.

African Sun to help educate the next generation

Although Kenya has targeted universal access by 2020, ahead of 2030 set under the UN’s Sustainable Development Goals, there is still much to do in the meantime to bring power to the rural areas.

Although Kenya is ahead of its peers in East Africa in electricity access, she trails other major African countries such as South Africa (84 per cent), Ghana (79 per cent) and Nigeria (59 per cent).  To bridge the gap Kenya has big ambitions to generate power from windfarms and solar power.

It may also care to look south to South Africa where the Sizwe Africa IT Group is making great strides in turning solar power into educational opportunities.

Each mobile classroom seats twenty-seven learners and can be transferred between locations. Each one comes equipped with an interactive smartboard and can plug into unlimited educational material and resources.

South Africa’s education system faces severe challenges, including access to schools in rural areas and access to resources. Studies show that learners lack basic skills and knowledge compared to counterparts across the world. The knock- on effect on universities and the workforce can be seen in low graduation rates and subsequent high unemployment rates.