Inclusion of young people living with disabilities in TVET

This brief is based on publications from our African Education Research Database (AERD) to highlight how young people living with disabilities can be supported to gain employment through participation in Technical and Vocational Education and Training (TVET). 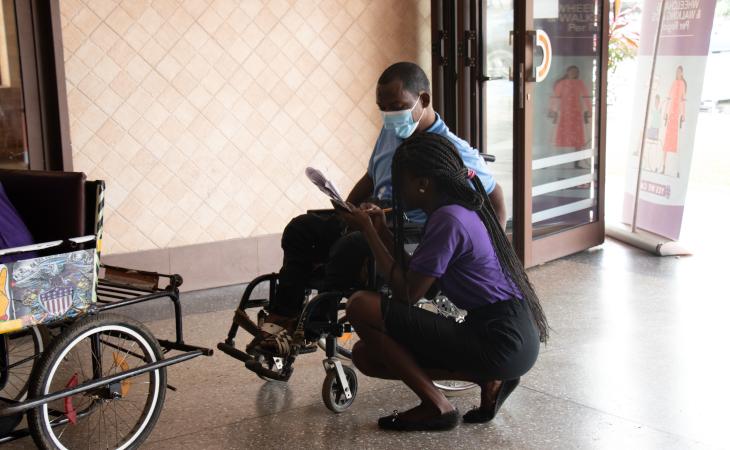 Issues on disability are increasingly gaining attention in public and policy documents.

Disability is a term generally used to describe limitations to undertake normal activity of daily living which someone of the same age can perform. Specifically, Okoye (2010) defined disability as a condition resulting from permanent injuries to the brain, spinal cord, eyes and other parts of the body, as a result of motor accidents, wars, natural disasters and diseases.

The United Nations adopted definition in the Convention on the Rights of Persons with Disabilities refers to persons with disabilities as ‘those who have long-term physical, mental, intellectual or sensory impairments which in interaction with various barriers may hinder their full and effective participation in society on an equal basis with others’ (United Nations, 2006, p. 4).

According to WHO report (2015), more than a billion people, or about 15% of the world’s population, are living with a disability, and 80% of them reside in low-income countries.

However, there is a dearth of research on TVET. For example, Rose et al. (2019) report that only 3% of education research published by Sub-Saharan Africa-based researchers, excluding South Africa, between 2010 and 2018 focused on TVET, compared to 35% and 28% of primary education and secondary education respectively. The 3% of publication includes all TVET so those specifically addressing youth with disabilities will be a smaller fraction.

This paper is based on publications from the  African Education Research Database (AERD) to highlight how young people living with disabilities can be supported to gain employment through participation in TVET.

It is worth mentioning that the AERD excludes publications from South Africa (see Rose et al. 2019). This report focuses on access, learning, and transition to work. Before addressing these three issues, a summary of key findings from the findings are  presented.

This paper is part of a series of mini reports, raising the profile of African education research published in the AERD. Other mini reports, including one on teacher training, can be found here.

There is a consensus around the role of TVET in addressing youth unemployment and underemployment in Africa. The key assumption behind TVET for marginalised groups, including those with disabilities, is that TVET will empower them with skills and knowledge to be self-reliant (Mosalagae, 2020). This will serve as an effective tool for realising social integration and self-esteem (UNESCO, 2015).

However,  people living with disabilities are faced with discrimination and barriers to full engagement in skills training and employment programmes (UNESCO, 2009). The situation is worse for females. For example, a study of five TVET institutions in Kenya revealed that only 38% of students with disabilities were female (Murgor et al. 2014). A possible reason for the underrepresentation of women is that most of the courses available are perceived to be ‘male suited’. This potentially discourages women from accessing these opportunities.

One solution to address this challenge is for institutions to widen course options available for women. In addition, institutions could publicise these courses better, to dispel the existing myths about suitability being predominantly for males – if they are suitable for women too. Furthermore, women who have successfully completed these programmes could be supported to lead community campaigns to encourage more women to access TVET.

According to Prasai (2010), barriers that hinder the participation of youth with disabilities in TVET include the nature of the individual’s disabilities, the socio-cultural environment and institutional policies.

Although scanty, research from the region shows efforts by governments, private sector, civil society and faith-based organisations to widening access for persons with disabilities. For example, Mugu and Oranga (2010) mentioned that Kenya has five national TVET institutes for persons with disabilities, with a total of approximately 2,400 students, making it one of the best performing countries in Africa.

In Ethiopia, persons with disabilities are currently admitted into various programmes at all the existing 35 training centres through a partnership between the International Labour Organisation (ILO) and the Ethiopian Centre for Disability and Development (ECDD) (ILO, 2017). There has been specific support for 5 selected TVET institutions in Amhara and Tigray regions to strengthen their capacity to better serve the needs of trainees.

Agyei-Quartey also recommended that institutions make their admission processes more accessible by advertising in media accessible to persons with visual and hearing disabilities. This includes 'investing in audio and television advertisements and the diffusion of vacancies to special schools and members of the Ghana Federation of Disability Organisations, to reach out to persons with disabilities’ (Agyei-Quartey, 2020, p. 17).

In relation to international organisations, the ILO (2017) recommends the provision of reasonable accommodation and training stipends to enable persons with disabilities to enroll and complete training courses. Tuomi et al. (2015) reported that in Tanzania, women with disabilities in tertiary education identified having role models and financial support as important factors for their access and learning.

Barriers and strategies for effective learning

Providing young people living with disabilities with access to TVET training is a very important step for empowerment. However, access without the required support to help them develop the competencies for social and economic integration will not achieve much (Mpofu, 2017).

Malle et al. (2015) observed a consensus among students with disabilities in Ethiopia on limited choices of courses made available by institutions. The reason given by administrators was that students with certain types of disabilities were unsuitable for admission into some programmes, particularly those requiring ‘hard skills’ such as automotive, manufacturing, construction, and electricity. For instance, administrators believed that students with less severe physical disabilities were better suited for courses requiring ‘hard skills’ than those with other types of impairments.

An example used to support this point was that in one of the TVET institutions in Ethiopia, the loom machines for the weaving course were not suited to students with a physical impairment in the lower limbs because the pedals of these machines are designed to be operated by lower limbs (Saloviita et al. 2015).

Claims relating to learning environments not suited to certain group of students, therefore limiting choices available to students, although genuine, is problematic because institutions can make adjustments if so desired. For example, one of the targeted TVET colleges in Ethiopia resolved the operational difficulties of existing loom machines by modifying some of them to be operated by hands rather than legs, making it accessible to students with physical impairment of lower limbs (Malle et al. 2015).

Creating an environment of care for students, especially shy ones, to ask questions and seek help is very critical in supporting learning. Furthermore, students with disability were unhappy about their safety within the institution and some practices that deny them the opportunity to develop certain skills. One of such unfair practices is that they are not allowed to contest for student leadership positions (Murgor et al. 2014).

To address some of these challenges, TVET institutions must work with stakeholders to identify country-specific skills requirements or align courses to reflect employment opportunities. This can facilitate smooth transition to work. It is also helpful to identify and work with charities supporting persons with disabilities. For example, EDUKANS and Light for the World Netherlands provide support for persons with disabilities to access TVET courses in Africa.

Persons with disabilities who are interested in establishing their own business can also be provided with financial support. Kenya has the Disability Development Fund, disbursed by the National Council of Persons with Disabilities and the National Fund for the Disabled. These funds provide support in the form of cash and equipment to individuals and groups, as well as institutions.

Technical and vocational education and training are critical for addressing unemployment among youth with disabilities in sub-Saharan Africa. Despite the benefits of TVET, young people with disabilities have low participation compared with those without.

Admissions processes and the learning environments as well as labour market conditions negatively affect the learning, social and economic integration of persons with disabilities. The dearth of good-quality evidence on this topic in Africa is worrying and needs urgent attention. Country-specific evidence on young people with disabilities and TVET will provide a better understanding of the problem.