From Sick bag to take off

What was the spark for the ESSA idea?

The idea for ESSA was born in schools in African slums and rural villages and from listening to learners, educators, policy makers and philanthropists over the last decade. It was really a combination of seeing a big opportunity to help make things better boosted by the fuel of frustration.

It is always worth challenging yourself when something goes well. My way is to “Imagine what you could now?” on the back of it and that was the way that ESSA came about. It just seemed like the obvious thing to do after having seen and learnt so much from Warwick in Africa.

We’d founded Warwick in Africa in 2006 and we teach learners and train teachers in slums and in rural areas of high poverty in Ghana, South Africa and Tanzania. By 2015 our £30,000 start-up had benefitted over 250,000 young Africans and over 2,000 teachers (it’s over 465,000 and 3,000 now). We were growing strongly, achieving high impact and our ‘big bangs per buck’ were getting noticed. Yet, realistically we were tiny in the context of the size of the problem.

There were also so many other things beyond direct teaching and training that were needed to transform educational outcomes. I met lots of people on the ground who knew what was needed but sadly didn’t have the opportunity of securing or mobilizing the resources needed to make the changes that they wanted to see. Paradoxically, at the same time corporates and foundations were complaining about the lack of backable projects and people to do them. It seemed such an un-joined up space with a myriad of organisations and people doing things with varying degrees of success. All frustratingly sub-optimal.

There had to be a better way and if it was possible to create something which was able to join up, inform, inspire, focus and increase impact for everyone investing in education in sub- Saharan Africa, then it might just help people transform educational outcomes. 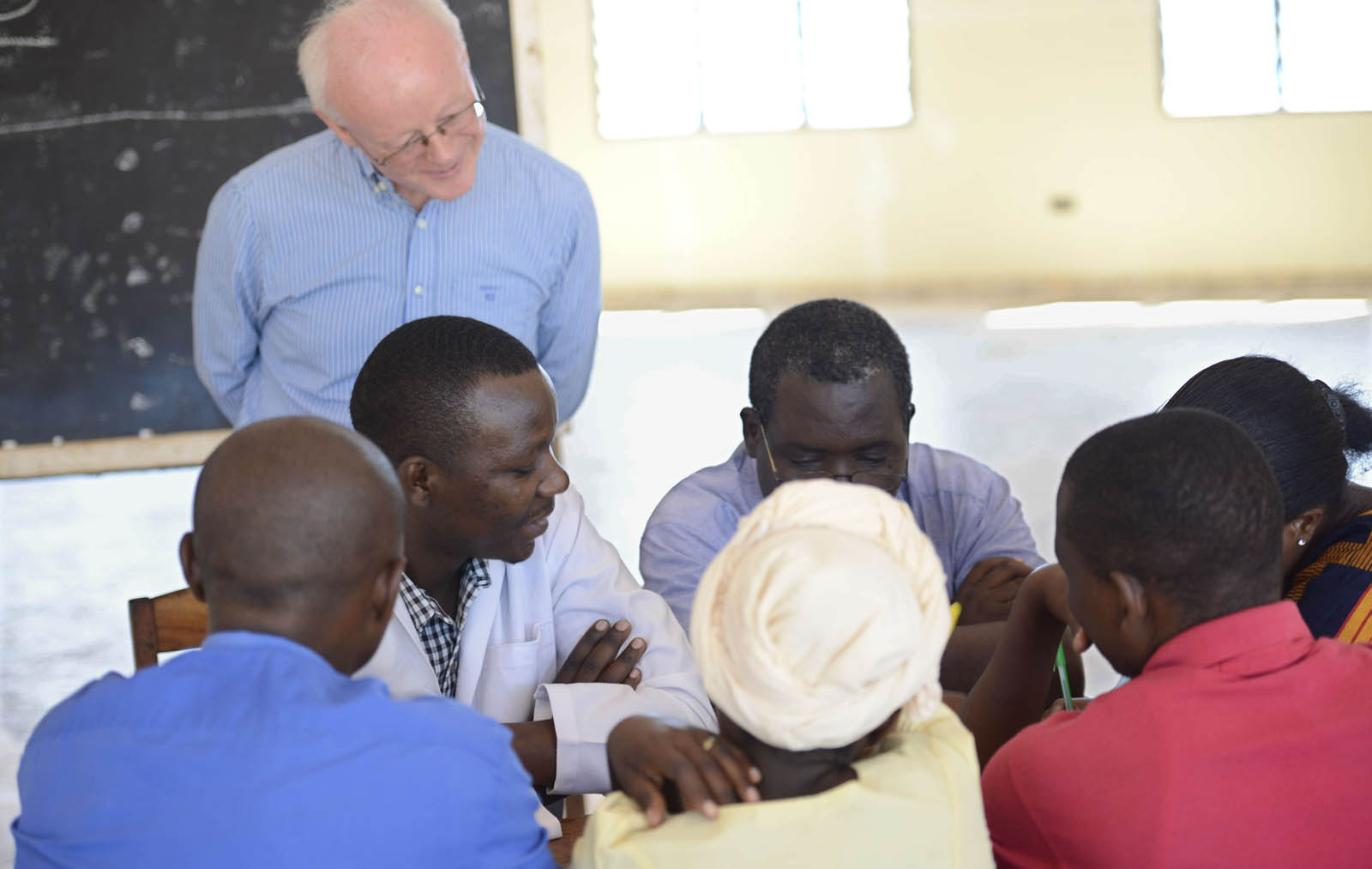 Is it true that the first concept for ESSA was drawn on the back of a sick bag on a flight from Accra to Johannesburg?

Absolutely! Travel, especially in Africa is so stimulating. There was no chance of sleep, my laptop battery was flat and I had run out of paper. The sick bag was all there was to try and capture what I was thinking.

As a mathematician by background I was frustrated by the lack of high quality data about education in the sub-Saharan Africa region as well as a number of systemic issues such as "Ghost teachers" which seemed stubbornly persistent. There also wasn't one place that you could go online to find out all the things you needed to know about education in the region. For example, who else is doing what we want to do, what is the best available research on the things you need to know, who are the top researchers, who might make a good partner, what are the highest impact models, who is funding what and what are the key statistics and needs for a region or a topic and more. Warwick in Africa had benefitted from many chance meetings of what I called ‘movers and shakers’ in the space but there was no obvious network or forum to exchange ideas or learn from others in different parts of the sector.

On the sick bag I wrote four things that a new social enterprise might do to help. These were:

The way that you do things is as important as what you do so I wrote down a few other words about the way in which we might do things.

Many people have asked me why we didn’t just add the ESSA activities to Warwick in Africa given its reputation. Simple, “Focus”. Warwick in Africa’s focus on direct delivery has been central to success. ESSA’s doing something quite different. The focus will still be intense as we aim to build step-by-step. Every step will also need intense focus to succeed and have its own set of impact metrics.

It’s so good that the four key dimensions of ESSA have remained intact and are starting to become a reality. Early feedback from those we are working with suggests we are holding true to the way we want to do things.

So, how did the ESSA concept fly from the sick bag to something that you could get serious backing for?

As ever this was down to having some fantastic friends who shared the vision, made it better and helped to turn it into something which ended up securing funding and other support from one of Europe's top Foundations, The Bosch Foundation.

The first of these kindred spirits was Mary McGrath the development director from The University of Warwick who was co-founder of Warwick in Africa. Mary had first-hand experience of the situation on the ground and could also understand it from the perspective of an educational powerhouse such as Warwick. A number of academics at Warwick then gave the idea a good intellectual kicking and it passed the test.

Phumi Mthiyne, an inspirational township teacher from Alexandra slum, Johannesburg is another person who provided a spur. Her achievements at Realogile High School have been remarkable. Not just because of the direct results and the constant stream of youngsters from there, especially girls, getting into top South African Universities. She and her colleagues have also demonstrated powerfully that small investments in talented and creative educators can have a massive multiplier effect. Investing in people matters just as much if not more as in physical things.

Chris Foy, a former fellow member of the Warwick University Council became a fellow founder. Chris was born in Africa and spent much of his life building businesses across the continent in Africa. Together we then worked with a Nigerian PhD Student from Warwick, Tosin Ige, who did some proper research into whether there was a real need and whether anyone had done what we were trying to do. Again we passed through that gate.

Organisationally there were two obvious routes we could go. The first, given the enthusiasm amongst a wide range of Warwick academics, was to create a new Africa centre at Warwick. The other was to create a new independent entity. The choice became simple when we thought about how to make ESSA properly African led and what we wanted it to be.

ESSA couldn’t be really Africa led, even if led by Africans if it was a part of a UK University. Moreover, the timing wouldn’t have worked for Warwick in any event as it was about to make a major investment elsewhere which was consuming management and development resource.

With this fresh start-up decision made the next step was to fine tune the proposition and get it properly funded, ideally with backers who had credibility in the space. It was at this point in September 2015 that we had a real stroke of luck.

A good friend and enthusiastic supporter of Warwick in Africa, BBC presenter Kirsty Lang and I were having lunch. Kirsty has lived and worked in South Africa. When I told her that we were now ready to get on the road and try and raise serious money for ESSA she immediately said that we should speak to the Bosch Foundation who she had recently facilitated a conference for in Berlin.

A couple of weeks later Olaf Hahn from the Bosch Foundation and I met and then in just a few months, following some fairly intensive due diligence, we had our first £1m commitment as well as a range of other support including the Bosch Foundation’s hugely impressive CEO Uta-Micaela Dürig on the Board.

Where did the name ESSA come from?

Throughout my career in chemicals, private equity and social enterprise I have had the great fortune to meet lots of inspiring people. Two of them, Carrie Stokes and Gill Thomas, are brand experts and had done a fantastic job in helping both 3i and Leap Confronting Conflict with their brand development. It’s almost reflex to turn to Carrie and Gill on such things and excited by the ESSA idea they very generously helped pro-bono.

As usual their questions, painstaking research and thinking inspired the name. Their simple question was “Do you want a name that says what it does on the tin or do you want a fresh name that you will invest in to become synonymous with what you do?”. We didn’t want to spend the time or money in creating an abstract name. Our working title for the “tin” was “ESSA-Education Sub Saharan Africa”. So, we tried ESSA out on various people and it worked well.

How’s it going, a year after start up?

As you can see from our website so far so good. This is my fourth social enterprise and as we all know start-ups are roller coaster experiences. So, it’s been the usual exhilarating mix of up and down with the odd bit of motion sickness!

We were able to get legally established very quickly thanks to some great advice from London law firm Bates Wells Braithwaite and Chris’s forensic attention to detail. We also struck lucky with our first major funder the Bosch Foundation who have been a brilliant partner and added a lot of value in so many ways most notably through Olaf and Uta-Micaela. They also responded well to my very ‘cheeky’ ask that Olaf be seconded to be our Founding Director with a brief to get ESSA established and then recruit an African successor. Olaf’s project management, relationship and linguistic skills combined with his network have enabled us to get off to a flying start.

We’ve also been able to place Africans at the heart of everything we do, not just with some of the partnerships above but in so many other ways. African students helped the Bosch Foundation do their due diligence, African teachers and learners in the Warwick in Africa schools and elsewhere have been involved in numerous workshops to provide insight and challenge and African students will be working on all of our 12 current projects. Our aim is to have a majority African Board as soon as we can, and we have made a good start in appointing Joel Kibazo, the Head of FTI’s African business and former communications director for the African Development Bank. Joel will be joined shortly by another leading African businessman prominent in the philanthropic community.
In keeping with our step-by-step approach, we decided to put an early emphasis on Higher Education. Why? Well because Higher Education institutions are very much regional educational hubs in most areas in Africa as well as being drivers of economic and social growth. They also tend to train the teachers, do research on education in their country, influence policy and have good links with local employers and governments. Apart from that they are also at the top of the educational food chain and we felt if we could do things that would help them then we could build on that and move back down the chain.

This seems to be paying off as you can see from the partnerships we have established and the work that we are doing.

We’ve made a promising start but there is a lot more to do. Our focus at the moment is to: deliver high impact from the projects and work currently underway, raise additional core and project funding, develop and increase our partnerships, continue to build our Board and team and invest in building our digital capability, social media communities and knowledge hub activities.

On top of that as we are all flying about a lot I am hopeful there will be many more sick bag moments!